In an exclusive interview for the AfroBallers, Pascal Siakam discusses his foundation, his basketball career, the upcoming season and much more!

From Douala-Cameroon to the Toronto Raptors and the NBA, it has been quite a journey for Pascal.

Following in the footsteps of other great African players who only picked up basketball very late in their teen years, Siakam was discovered as a potential baller at a local camp by Luc Mbah a Moute in 2011, his Junior year in High School. 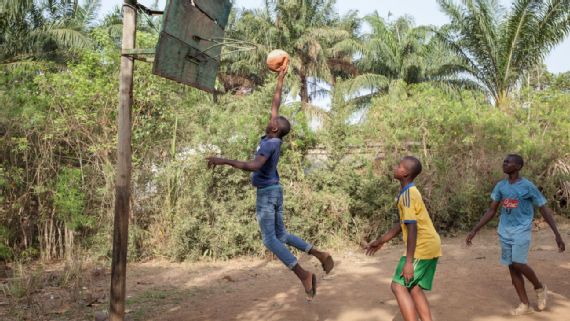 Despite having had virtually no organized basketball experience at the time, he gained attention for his impressive athleticism and extremely high energy level. As the man who would later draft him with the 27th pick of the 2016 NBA Draft, Masai Ujiri – who had been at this camp – recalled, “His effort was memorable.”

That effort which impressed Masai is also what Pascal highlights as the key to his success in the first question of our interview:

“My motor and energy is definitely something that sets me apart. Being from what I’m from you just have to have those skills to be able to get ahead. You don’t get a lot of opportunities. I always try to carry it with me and my family has also been very helpful with that.”

In the following year, under Luc Mbah a Moute’s mentorship, Siakam moved to the United States at 18 years old. From there, to his prep-school days in Texas, then to his prolific college career in New Mexico and finally to his NBA career in Toronto, that energy, that drive and that passion Siakam mentions are definitely the key to his unwearied evolution as a basketball player.

Spicy P – as he is known by Raptors’ loyal fans – has no plans to stop improving.

With a career that already has an All-Star appearance, multiple All-NBA selections, a Most Improved Player Award and the 2019 NBA Championship, his motivation to strive for more seems as strong as ever when answering our question about his goals for the upcoming NBA season:

“For me, individually, I just wanna get better! Each year be a better player than I was last year. I was 3rd All-NBA Team this year, so my goal is to get better than that, be an All-Star and all those different things. I just want to continue to improve, this will be a great season and I’m excited about it!” Toronto has a really strong team and added yet another versatile 6’8” player to their army of them in 2022 Champion Otto Porter Jr. With expected development of their young core – particularly from reigning Rookie of The Year Scottie Barnes and the skilled AfroBaller big man Precious Achiuwa – they are a virtual lock to make the Playoffs. Siakam and Koloko – the Douala dynamic duo has a bright future in Toronto.

If Siakam’s improvement is as great as his motivation and he reaches the Top 5 player status in the league, there is no telling how high of a seed his Raptors can secure nor how far in the Playoffs he can take them.

Fresh off the second edition of his PS43 Foundation’s camp – the Skills Académie – held in Douala, Pascal has a strong vision not only for his own future, but also for the ones of Cameroon’s youth. Siakam sizes up the young defender in his camp’s scrimmage.

It is only right that his life would come full circle in now being the NBA player providing an opportunity to kids in his hometown, much like the one he had back in Mbah a Moute’s camp a decade earlier.

When asked about his foundation’s focus and its objectives for the kids it supports, his message was on point:

“Education and Basketball are the focus of the Foundation, those are skills you learn that help you in life. Those two go hand-in-hand, in order to have a basketball career you need education, but in life you need education period. Most of the kids we work with will not make it to the NBA, but if they have an education, it’ll help them no matter what. In playing basketball they also learn about communicating, leadership and other things that’ll help them in their lives.”

The sky’s the limit for the AfroBaller from Douala. Be it on the basketball court, further adding to his already impressive career, or as a mentor and philanthropist to Africa’s youth, Pascal’s origins will keep being his guiding star.

You can watch the full interview here.